In the Cards 03x18
A surprise announcement by Peter throws Lou's wedding plans into disarray while Amy and Ty are forced to make difficult decisions about their futures.
Ring of Fire 03x17
When Amy follows in her mother's footsteps and enters a professional colt starting competition her gift with horses, and self-confidence, is put to the test.
Spin Out 03x16
Caleb struggles to get over the physical and emotional scars from his terrible accident as Amy tries to get him back on a horse and Tim doles out some tough love.
Second Chances 03x15
Amy faces a tough moral dilemma when she discovers Mr. Hanley has abandoned his horses and is on the brink of losing his farm.
The Happy List 03x14
Amy and Ty are at odds over his purchase of a vintage motorcycle while Caleb goes off to a rodeo in Montana despite Ashley's growing concerns about his life on the circuit.
Quarantine 03x13
When a dangerous horse disease called Strangles puts Heartland under quarantine relationships are put to the test and Pegasus becomes very ill.
The Reckoning 03x12
Victor Whitetail makes a surprise visit to Heartland, which stirs up the past and leaves Tim wondering if Victor was more than just friends with his ex-wife.
Catch and Release 03x11
While the boys head off on a fishing trip, the girls are left back at Heartland to deal with the havoc caused by a dog, a porcupine and a herd of escaped cows.
Eye of the Wolf 03x10
Amy leads a rescue search to find Ty and Scott, whose plane has gone missing in a remote forested mountain area.
Broken Arrow 03x09
Amy is upset when Ty flies off with Scott to a remote vet call on his last day before heading to vet school.
The Fix 03x08
Ty protects his mother Lily from his abusive stepfather, who shows up at Heartland to win her back.
The Starting Gate 03x07
When Tim buys a racehorse from Lisa, he puts everything on the line, including Amy, to win big.
Growing Pains 03x06
When Amy and Ty become the proud, new parents of an orphaned foal, the strength of their relationship is put to the test.
Glory Days 03x05
Tim and Jack are reliving their glory days, and Amy begins to wonder if Ty is revisiting his past when he and Kit are thrown together dealing with her pregnant mare.
The Haunting of Hanley Barn 03x04
Amy and Ty spend the night in the "haunted" Hanley barn, trying to get to the bottom of a mystery.
Man's Best Friend 03x03
Jack's truck is on its way to rust bucket heaven, forcing him to find the courage to say goodbye to a part of his past.
Little Secrets 03x02
Amy finds herself caught in the middle of a family crisis when she tries to help a girl and her horse recover from what appears to be a freak accident. 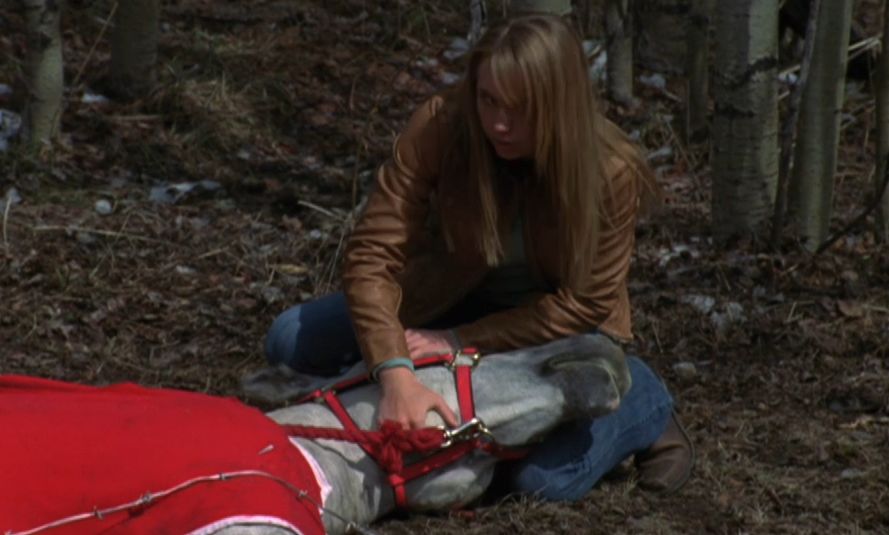 Miracle 03x01
Amy is thrust into the limelight when she performs a "miracle" on a traumatized horse and a video clip of the event is posted online.