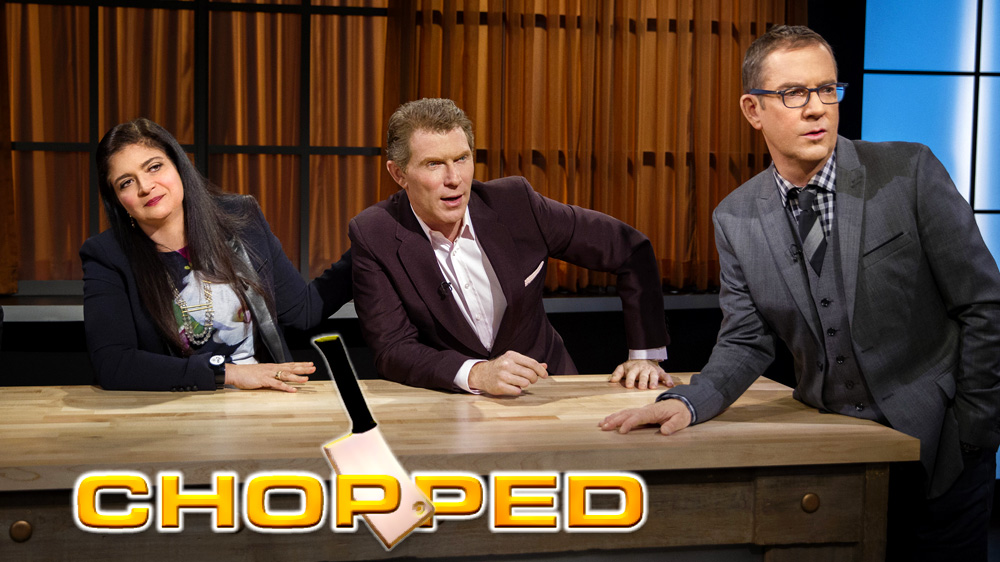 Chopped is a cooking competition show that is all about skill, speed and ingenuity. Each week, four chefs compete before a panel of expert judges and turn baskets of mystery ingredients into an extraordinary three-course meal. Course by course, the chefs will be "chopped" from the competition until only one winner remains. The challenge? They have seconds to plan and 30 minutes to cook an amazing course with the basket of mystery ingredients given to them moments before the clock starts ticking! And the pressure doesn't stop there. Once they've completed their dish, they've got to survive the Chopping Block where our three judges are waiting to be wowed and not shy about voicing their culinary criticisms! Our host, Ted Allen, leads this high-energy, high-pressure show that will have viewers rooting for a winner and cheering for the losers. Chopped is a game of passion, expertise and skill — and in the end, only one chef will survive the Chopping Block. Who will make the cut? The answer is on Chopped! Add to my shows

Shakes and Fries 2021x37
Two diner favorites find a home in the ingredient baskets, and the competitors are challenged to make the most of milkshakes and French fries. First, they must make berry and basil work together in the appetizer round. A city's signature dish is part of the challenge in round two, and a toaster treat meets a fun fry variation in the dessert basket.
Playing with Fire: Finale 2021x36
In this fiery tournament finale, four winners return with their sights set on taking the title of Chopped Grand Champion. The baskets contain ingredients reminiscent of the preliminary battle themes: wild game, steaks, surf and turf and pork. The appetizer round has the chefs working with a meat not found in the grocery store. A bucket of something frozen is part of the entree basket puzzle, and the two finalists who make it to the dessert round endeavor to give it their all with corn on the cob and an unconventional cheesecake. Only one chef can score the life-changing grand prize and walk away knowing they triumphed while 15 other skilled chefs went down in flames.
Playing with Fire: Surf and Turf 2021x35
Four talented chefs push themselves to the limit in order to impress the judges and win a spot in the $25,000 live-fire tournament finale. They must make flame-kissed dishes that celebrate the treasures of both land and sea, and the judges want to see them modernize an old concept. In the first basket, strange sushi requires raw talent, and a bowl of cheese could be an unwelcome addition to the entree basket. The two finalists discover what's lurking inside the surf-and-turf dessert basket.
Playing with Fire: High Stakes 2021x34
Playing with fire is serious business in this "high-steaks" preliminary battle of Chopped's thrilling, flame-filled tournament. The four competitors are excited about the delicious possibilities of a steak-centric meal, but a weird watermelon adds to the challenge in round one. The entree round finds the chefs wondering what to do with a giant slab of meat in just 30 minutes, and the two chefs who make it to the dessert round compete with humility, passion and grilled pizza as they face off for a spot in the finale.
Playing with Fire: Hog Heaven 2021x33
Four phenomenal live-fire cooks stand tall, ready to claim the last remaining spot in the tournament's finale. They get lucky with a promise of perfectly porky baskets, but only one chef will take the judges to hog heaven. One of nature's sweetest gifts is a part of the appetizer basket, but it may not be a treat to the competitors. A prized piece of pork seems like a gimme in the entree basket, and as the last two competitors race the clock in the dessert round, the $25,000 grand prize begins to feel within reach. But only one chef will still be in the running after the last cloche is lifted.
Playing with Fire: Wild Things 2021x32
In a live-fire Chopped tournament to show what hot ideas, techniques and flavors chefs bring to the table, the competitors take a walk on the wild side with wild game in every basket. In the appetizer basket, a crispy Korean snack food is a creepy-crawly shocker. The judges wonder what to expect when they chomp down on alligator entrees, and in the dessert round, the two chefs left fighting for a spot in the finale wrestle with a basket that includes wild sandwiches and daring dairy.
Ballpark Baskets 2021x31
Simple concession stand snacks are so old-school! The latest stadium fare is substantial and out-of-the-park sensational and substantial, so when four bold competitors get ballpark foods in every basket, the judges have high expectations. Cheesy, fruity and doughy appetizers are in the lineup for round one, and the entree basket contains some basic finger foods that the chefs must turn into home runs. The remaining chefs in the dessert round face no shortage of sweet surprises in the final ballpark basket.
Chef's Best Friend 2021x30
It's a doggone Chopped event! In addition to competing with appetizers, entrees and desserts, dog-loving chefs make treats for a canine judge! Things could get "ruff" if the golden retriever with the golden palate turns up its nose at their hard work. The chefs are literally thrown a bone in the first basket, and a dog-friendly beverage and a pasta dish must be combined in the second round. The dessert round finds the competitors figuring out what to do with bananas and a certain nose-to-tail treasure before this Chopped dog show reaches its exciting conclusion. 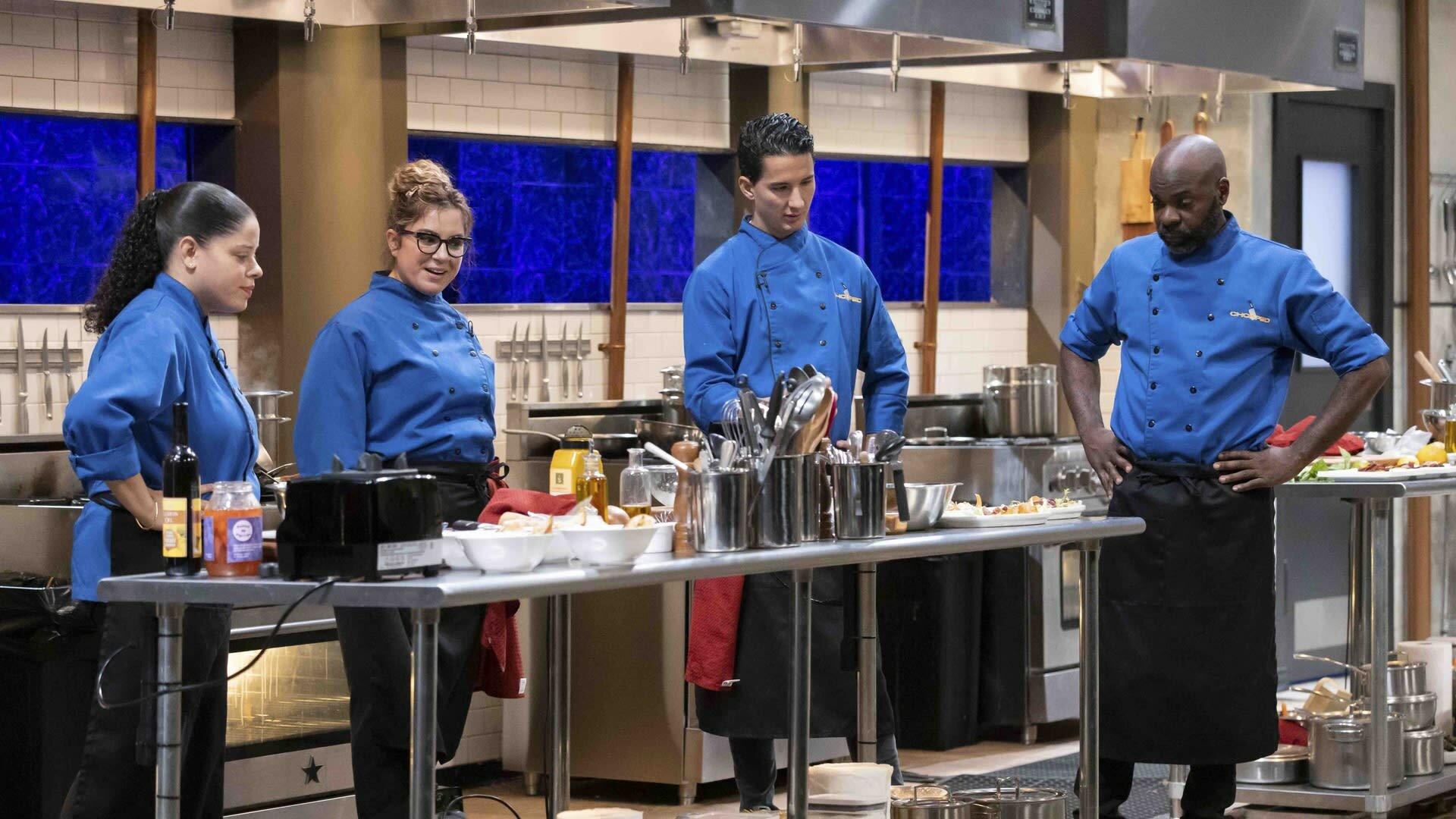 Alton's Maniacal Baskets: Finale 2021x29
In the wild conclusion of Alton Brown's Maniacal Baskets Tournament, champions from the first four battles compete for the title of Chopped Grand Champion! Before cooking begins, Alton has a big announcement that's sure to get the chefs fired up. Of course, the finale ingredients are super tough. For the entree round, the chefs open the baskets to discover one of the items staring back at them! A weird wedding cake is part of the dessert round puzzle as the two remaining chefs face off to see who will score major bragging rights and the grand prize. 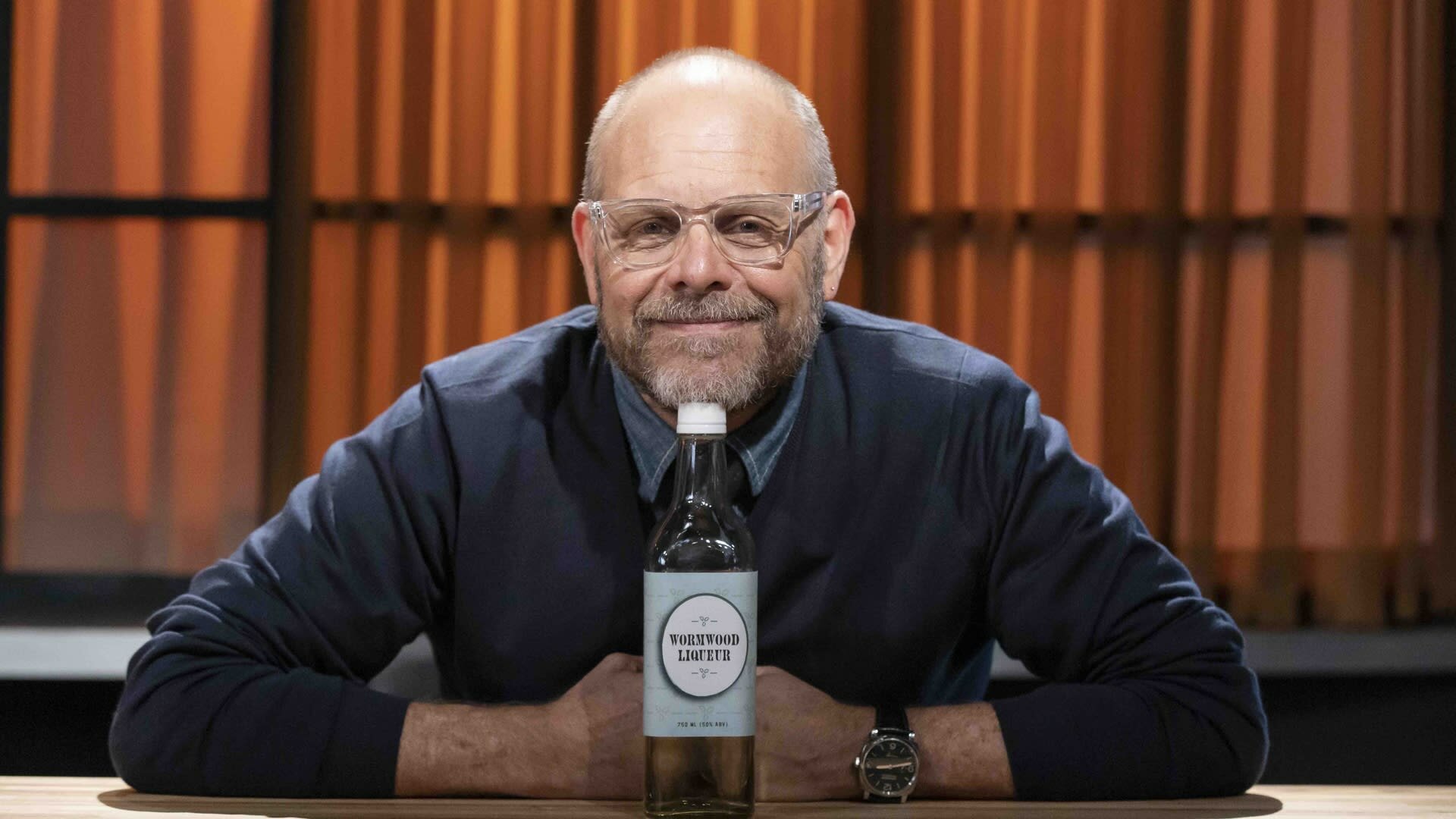 Alton's Maniacal Baskets: Part 4 2021x28
Alton Brown has taken control of the Chopped baskets, enlisting his fans' help to curate maniacal ingredients for an epic tournament. In the first round, two of the chefs decide to make the same thing. Will the judges prefer one version to the other? In the entree basket, the chefs find a fermented Japanese dish that's definitely an acquired taste as well as a strange banana product. It just might be the most difficult Chopped basket ever! Finally, the two bold chefs who make it to the dessert round must work with a fluffy, porky surprise.